Sneakers is an American term referring to a footwear with soles made of rubber or other synthetic material and the upper part made of leather or canvas. Sneakers were originally intended for athletes but today, ordinary people can casually wear it.

Sneakers comprise of high tops, low tops, mid cut, sneaker boots and slip on. If you are planning to buy sneakers, it is good if you know your shoe size and famous brands that offer the best experience. 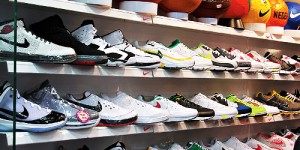 Nike is also an American company that designs and develops footwear, apparel, equipment, accessories and services. In fact it is the world’s leading supplier of athletic shoes and apparel and a major manufacturer of apparel equipments. They sponsor a number of high profile athletes and sports teams around the world.

They carry the swoosh logo.

Puma is a German company that manufactures athletic shoes and other sportswear. They offer lines of shoes and sports clothing. Footballers and other basketball players prefer this brand.

Their logo is easy to recognize because of the jumping Puma.